The owner of Mahalo, a Malö 38, came to us with a problem.  A new engine had been specced and purchased for the boat, but due to restrictions with the sump and bilge area, it could not be mounted in the same position as the original engine.

After a number of options were considered, the owner decided that the best course of action was to raise the engine a little, but this meant that the drive shaft was no longer in line with the original.  The tough decision was made to re-bore the stern tube and we took on the job with gusto.

It turns out that Malö yachts are made very tough and it took us two days of hard labour to bore out the old tube.  We had a special cutter fabricated to do the job:

Once the new hole was bored, we liaised closely with the engineers to ensure an exact alignment of the new shaft with the new engine position, then fixed it in place and filled with epoxy. 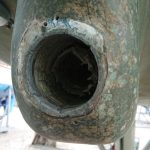 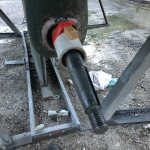 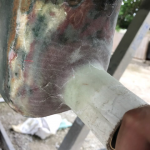 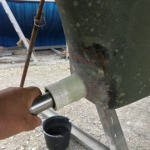 Once cured, the surface was finished with Copper Coat, ready for the final fitting of the shaft, prop and rope cutter. 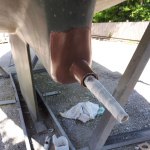 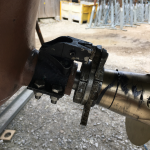 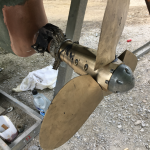 This was one of those jobs where each stage turned into a new major challenge.  With our summer holiday fast approaching, the raising of the engine was an unexpected twist in the story but Barry and his team dropped everything to get this major (in my mind) piece of work done and complete as fast as possible, but to an excellent standard comparable to the original build quality of the boat.  Which is no mean feat, Swedes build their boats well.

Thank you Barry, you helped save my holiday!