Raven is a Sweden Yachts 390 that was brought in over the winter of 2017 / 2018 for a significant restoration.  The teak deck was in a poor state, as was some of the interior, so the owners asked us to replace the deck and sole, as well as commissioning a variety of other work, inside and out.

The topsides were sanded and polished, and the underside was stripped of all antifouling to reveal the gel coat had previously been grit blasted which had undulated the hull. This had to be faired up with epoxies and Copper Coated on completion. 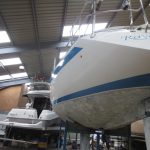 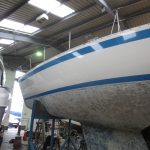 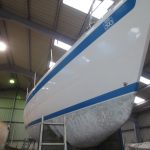 We laid a new teak deck: 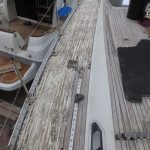 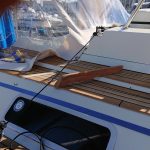 Inside the boat we fitted a new cabin sole and also made a lot of internal changes: 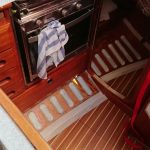 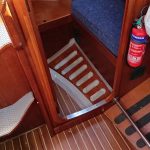 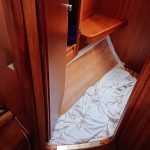 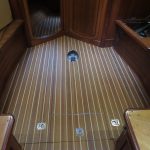 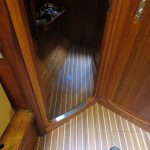 The finished hull, which has been Coppercoated ready for re-launch: 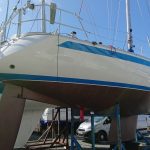 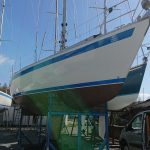 With her beautiful new cabin sole and interior: 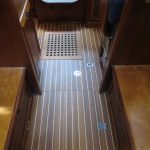 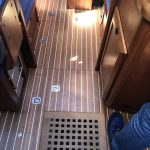 The boat is looking stunning, back in the water after relaunch: 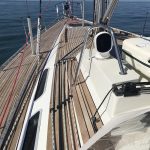 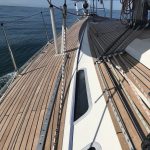 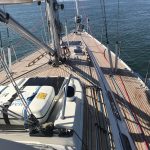 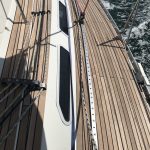 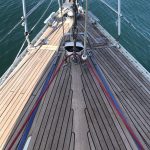 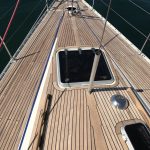 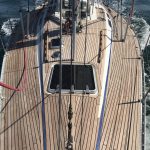 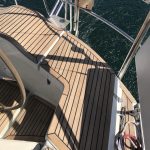 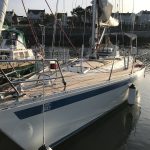 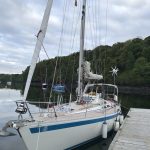 RAVEN, our Sweden Yachts 390, being 26 years old was starting to look very tired.

Her once beautiful teak decks were worn out, with screws showing everywhere and the caulking so thin it was all falling out.

It was time to either sell her or it would mean a complete refit.

But luckily we found Barry. We had already had quotes on the UK south coast for new teak decks from two separate places and were alarmed at the price.

Barry was recommended through word of mouth as a really high-quality teak deck fitter at affordable prices and when we heard that he had recently fitted teak decks to Tom Cunliffe’s boat we thought that was a good enough recommendation for us!

So we took RAVEN from the south coast to Conwy, North Wales for our new teak decks and more!

Barry, as well as being a very honest and pleasant chap to deal with, is a real craftsman, careful and proud about his work, a perfectionist, treating the boat as though it was his own. The quality of his work is excellent and we found his costs were a great deal cheaper than other quotes and proved to not compromise on quality. He honoured his original quotation well during the refit.

He has had our boat over the winter and not only renewed the teak decks but supplied a new sole floor. He also refurbished other wood work down below. With his team he also repaired and cleaned up and polished the coach roof and the topsides. His team also applied a copper antifoul, as well as introducing other craftsmen for electrical and instrument upgrades, rigging and metal work.

We are very pleased with the results and would be very happy to recommend Barry Lovell for you boat refurbishment, in particular the teak decks and all woodwork.

For any other info contact Jon Kitching or Richard Foulkes (phone numbers provided on request).